Upset About The Pigs

I was reading a Bible verse this week from Mark chapter five, "At first they were in awe - and then they were upset, upset over the drowned pigs. They demanded that Jesus leave and not come back."

The story is about Jesus crazily, miraculously saving a man who has been in bondage for years. The whole situation is hard to wrap my head around. (Jesus sets the man free by sending the spirit that was terrorizing him into a herd of pigs and those pigs commit mass suicide and jump off a cliff.)

It's an intense drama to say the least, but the beauty of it is that Jesus reaches behind all the fear, all the pandemonium and gives this poor man his freedom, he gives him his life back. At first people are so excited with him and are in awe. But then they notice the pigs. And they are angry about the pigs.

As I was reading this I realized how often I am upset over the pigs. Freedom and grace is messy business. So is obedience. As a mama I see freedom and obedience in the trails of glitter and cut up craft paper and really loud noises through my home. I see it in lengthy conversations, repetition, patience, a willingness to hear honesty and allowing individuality in my house. As a wife I see it in the choices of release, in the absence of control, in trust and letting go.

As people, friends, we see it in hurts and misunderstandings, forgiveness and hard choices. In muddy, human, emotional messes. Freedom is beautiful, catalytic, and completely and totally out of our control. Sometimes it feels like we are jumping off the cliff, sometimes it feels like our sanity is. But always, never is it something we are in charge of.

I have been so convicted this week not to lose my awe. Not to notice pigs. For those folks it was their loss of income - a valid complaint, but a poor comparison to what was really valuable. I am praying my heart will celebrate freedom, generosity, kindness, grace, answered prayers - and not complain about pigs. I have too often complained about and focused on the pigs.

It's embarrassing. But true.
Posted by Misha at 8:47 AM

There is so much truth here and I need to keep thinking on it for a while- but it brings to mind a story I read last night about a Haitian boy who was evacuated to the U.S. for med. treatment, costing over $20,000, but died anyway . . . and the question was asked was it worth it? We still find pigs more valuable, it seems.

So true, my friend. I, too, have complained about the pigs. Another way of saying just what I was thinking to myself today :-)

i need that honey...thank you!

This so hits home for me today...thank you.

Jesus, help me get my eyes of the pigs.

Heather of the EO said...

I do it too, of course. I scream "what about my pigs!" and forget the freedom and the grace.

not to lose my awe.

oh misha, so true. let's not get swayed by the pigs.

journeying with you, sister....

loved this post...I, too, always seem to be fixated on those pigs. Thank you for always sharing your heart 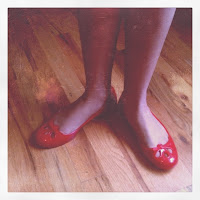 "I like living. I have sometimes been wildly, despairingly, acutely miserable, racked with sorrow, but through it all I still know quite certainly that just to be alive is a grand thing." ~ Agatha Christie

"For every runner who tours the world running marathons, there are thousands who run to hear the leaves and listen to the rain, and look to the day when it is suddenly as easy as a bird in flight. " ~ George Sheehan

"I know nothing, except what everyone knows ~
if there when Grace dances, I should dance."
~ W.H. Auden

"I do not want to be indifferent to the joys or beauties of this life. For through these, as through pain, we are enabled to see purpose in randomness, pattern in chaos." ~ Madeleine L'Engle

"Running has taken me in, and continues to comfort, heal and challenge me in all kinds of magical ways. I am not a 'good runner' because I am me. I am a good 'me' because I am a runner." ~ Kristin Armstrong

To Receive These Posts by Email

Books & Links I Love About Connecting Our Bodies To Spiritual Learning

You are welcome to link to me - please can you let me know if you do? All writing and photos here are mine and because they often are of, or about, my children, please don't copy them without permission.
I do not have any affiliate relationships ~ all recommendations are purely that.